(Download all four parts of this study by clicking WRITTEN. Download or listen to the spoken message by clicking SPOKEN.)

3. The Omniscience of Jesus

In the last chapter of John’s Gospel, John writes: “Jesus did many other signs in the presence of the disciples, which are not written in this book.” For he adds that if all the miracles of Jesus were written down, “I suppose even the world itself could not contain all the books that would be written.” 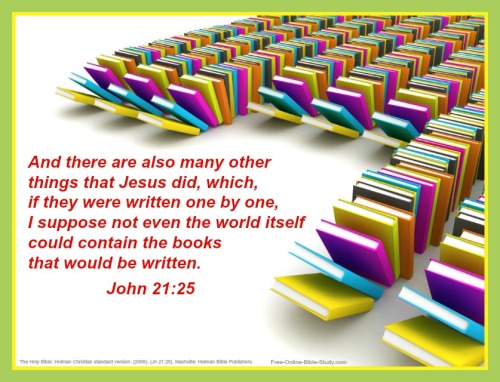 I mention that because many of those unwritten miracles take place here in verse 23 where John closes the chapter like this. “Now when He was in Jerusalem at the Passover feast, many believed in His name when they saw the signs that He was doing. But Jesus on his part did not entrust himself to them, because He knew all people and needed no one to bear witness about man, for He Himself knew what was in man.” Jesus performed countless miracles in Jerusalem before, during, and after the Passover with countless people coming up to Him and saying, “I believe in you, Jesus. I believe that you are the Messiah.” Do you know what today’s preachers would do if they got a response like that? “Quick! Count how many hands were raised, take an offering, and add their names to my email list!” But Jesus didn’t do that. 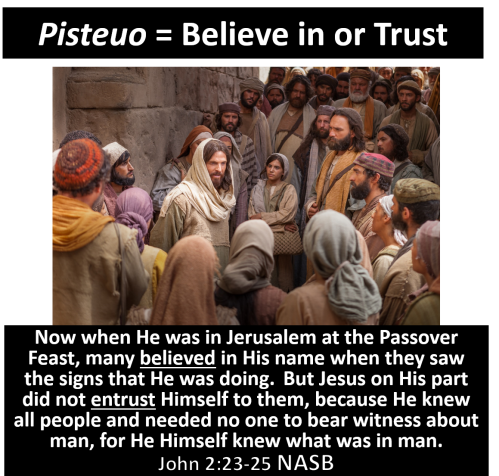 Instead notice John’s play on words in verse 23. Underline the key words: “believed” and “entrust,” because they’re the same word in the Greek—pisteuo meaning to believe or trust in someone. In other words, what John is saying is that the people were believing in Jesus, but Jesus wasn’t believing in them! Why not? Because Jesus knows what’s in each one of our hearts, and it is not good. Jeremiah 17:9 warns, “The heart is deceitful above all things, and desperately wicked. Who can know it?” Paul later admitted of himself in Romans 7:18, “In me, that is, in my flesh, dwells no good thing.”

Have you recognized that about yourself, that apart from Jesus, there isn’t one good thing in you? For within your flesh are the seeds of every evil thing under the sun! In fact, John says even your faith in Jesus may not be the right kind of faith. Again and again he will warn us in his Gospel that there is a belief which is not a belief, a belief that is superficial, self-serving, and likely to betray our Savior just as Judas. And Jesus knows the difference between the two. That’s why Peter, who denied Him 3 times and was later asked by Him 3 times, “Do you love Me?” finally blurted out, “Lord, you know all things. You know that I love you!”

We need Him to test our faith as well, because the sad fact is there are millions of souls in hell today who thought they were believers and were not. They will say to Him on Judgment Day, “Lord, did we not prophesy in Your name, cast out devils in Your name, and do good works in Your name?” And He will say to them, “I never knew you. Depart from Me, you evildoers!”

How do we make sure that doesn’t happen to us? By cleansing our temples now before His anger flares up and He does it Himself! Some of you may have heard the story of my little sister’s party when I was in college and she was in high school living at home. My parents were gone for the weekend, but I stopped by on Friday night to pick something up only to find 50 to 100 teenagers in their house drinking beer, smoking marijuana, and doing others things my parents would not have approved of. So what did I immediately do? I drove them out and helped my sister clean up the mess before the neighbors called the police and my parents found out about it.

Likewise, just at I knew my parents would be returning soon, we know Jesus is also coming back very soon! When He does, will He find your heart clean and ready to be His home? As you may know, John the Apostle also wrote us a letter with this warning. In it, he begged, “Little children, abide in Him, so that when He appears we may be confident and not shrink from Him in shame at His coming. For if you know that He is righteous, you know it’s only those who practice righteousness who are born of Him.” So let’s stay close to Him and keep ourselves righteous, for He is coming sooner than we think.