Did you do any spring housecleaning this year? What about weeding your garden or doing those summer projects you can only do when the sun is shining before the autumn rains begin – like painting your house or repairing your roof? Why do we take time to do these things? So Proverbs 24 won’t happen to us! 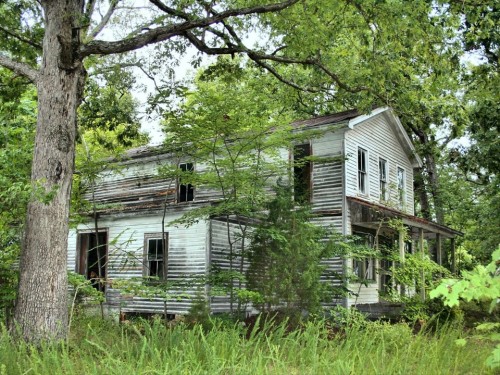 Solomon warned, “I passed by the field of the sluggard and the vineyard of the man lacking sense, and behold, it was overgrown with thistles; its surface was covered with nettles, and its stone wall was broken down. When I saw it…I received instruction. A little sleep, a little slumber, a little folding of the hands to rest, then your poverty will come as a robber and your want like an armed man.”

An older Christian sister warned me years ago, “You can tell what a woman is like by the way she takes care of her home and her hands, and you can tell what a man is like by how he takes care of his car and his shoes.” So I washed my truck that week, bought a new pair of shoes, and started painting the trim around our house not just because it was needed, but to please the Lord who gave us these things to manage for Him. That brings me to the topic of this study—“God’s Housekeeping Project” found in John 2:12-25.

By way of review, we’ve been following Jesus along with His disciples, for a week and about 35 miles now—from the Jordan River where John was baptizing to Bethsaida, 25 miles north where He met Philip and Nathanael. Then we hiked 9 miles west to Cana where Jesus performed the first sign of His Deity by turning water to wine. For those of you who are visual learners, you can see how it was laid out with Bethsaida to the east at the right of the screen, Capernaum in the center, and Cana of Galilee off the screen to the west in the foothills above the Sea of Galilee.

But John says in verse 12, “After this He went down to Capernaum with His mother and His brothers and His disciples, and they stayed there for a few days.” The Hebrew name is Kafer Nahum, meaning “the village of Nahum.” That’s where the minor prophet Nahum was from. Why stop there? Because from this point on, that’ll be the headquarters of Jesus’ ministry when He’s in Galilee! Even though it was small, Capernaum was located on the main trade route connecting Africa and Europe and with all the traffic between the two passing through that village. 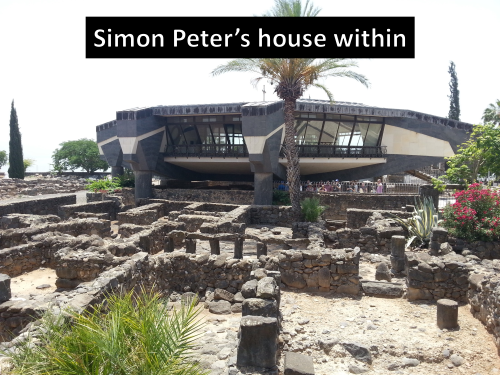 Capernaum was also the village where Peter’s home was located and out of which Jesus conducted His ministry. That’s also where He healed Peter’s mother-in-law of a fever early in His ministry. Cheryl and I visited there on our trip to the Holy Land several years ago, not only seeing the stone house that belonged to Peter and was later the meeting place of the church in Capernaum; we also visited the first century synagogue there and stood on the very spot where Jesus preached on the Sabbath! 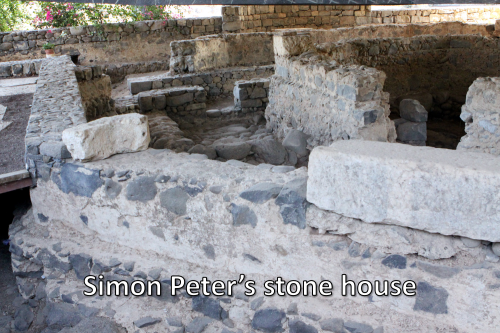 But they only stayed a few days at that time (verse 13) because “the Passover of the Jews was at hand.” So they made Aliyah (“went up to Jerusalem”), as the Law required every adult male to do at Passover. John records four times Jesus did that with His disciples, which is how we know His ministry lasted just over 3 years.

But there was also a second reason He went up to Jerusalem. For the first 30 years of His life, Jesus was busy about His mother’s business, working in the carpentry shop to provide for her and His younger siblings after Joseph, His stepfather, died. But now that His half-brothers are old enough to take care of themselves, it’s time for Jesus to be about His Father’s business, presenting Himself as Messiah to the religious rulers in Judea and cleaning up the mess they have made of His Father’s House. In fact, He’ll spend the entire first year of His ministry in or about Jerusalem proving His Deity by the miracles He performed.

The first task at hand is spring cleaning in the House of God. In doing so, we’ll witness 3 facts about Jesus that we haven’t seen yet—1) His anger, 2) His authority, and 3) His omniscience—each one a clear sign of His Deity. But as John 1:11 warned us: “He came unto His own, and His own did not receive Him.” So He knows He won’t receive a warm welcome. And yet, He’s absolutely fearless about it, letting the chips fall where they may, His Deity evidenced in His anger towards sin. That will be the focus of our next study.