You’re Kidding! You Believe that God Became a Man? 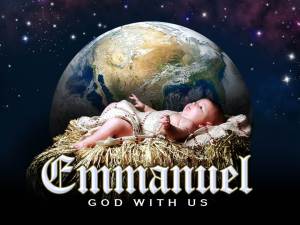 Did you know that we Christians believe some incredible things? The most incredible is this: We believe that God became a man. First, of course, you have to believe that there is a God who created everything—you, me, the universe—out of nothing. That’s something that took me years to believe. But we Christians go way beyond that and say something even more unusual. We say that God became a man in the Person of His Son, Jesus Christ.

Why would we believe such a thing? One reason is because that’s what the OT prophets predicted hundreds of years before Jesus was born—that a virgin would conceive and give birth to a Son (If God became a man, we’d expect Him to have an unusual entrance into life, wouldn’t we?), that it would happen in the little town of Bethlehem, and that we would call His name Emmanuel, which translated means, “God with us!” Many of you are familiar with that and some of the other prophecies regarding His Birth.

But did you know that according to scholars of the Bible, Jesus fulfilled over 300 prophecies at His first coming, many of which He had no control over—like when and where He’d be born. And what are the odds of all these things coming true in the life of just one person? The odds were astronomical! 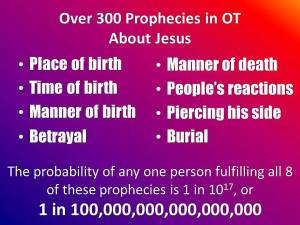 But why would God become man? The answer is: Because you and I were in trouble, and we needed Him to save us. You are probably familiar with what the angel said to the shepherds of Bethlehem as they watched over their flocks by night. He said to them in Luke 2:10-12 says, “Fear not: for, behold, I bring you good tidings of great joy, which shall be to all people. For to you is born this day in the city of David a Savior which is Christ the Lord. And this shall be a sign to you; you shall find the babe wrapped in swaddling clothes, lying in a manger.”

But have you ever asked yourself how that was a sign to them? This was something Micah prophesied 700 years before Jesus was born, saying that the first place the good news would be revealed was at Migdal Eder, the tower of the flock just outside Bethlehem. What was the tower of the flock? It was a two-story tower in the pasture lands outside of Bethlehem from the top of which the shepherds watched their flocks to keep them safe from predators. In fact, its remains are still there today, and do you know what we have learned about it?

It turns out that the shepherds to whom the angels appeared were actually shepherd-priests who served in the Temple in Jerusalem, which is just 6 miles from Bethlehem. And although they were poor, all the pastures lands from Bethlehem to Jerusalem belonged to them. That is where (Get this!) they raised the lambs that were being prepared for sacrifice in the Temple. And while some of the shepherd-priests kept watch over their flocks from the top of the tower, do you know what the other shepherd-priests were doing in the bottom of the tower? They were helping the pregnant ewes give birth to their lambs so they would not be blemished in the process! Because in order to be fit for sacrifice, a lamb had to be perfect and without blemish.

One more point: Do you know how the shepherd-priests kept a lamb from being blemished after it was born? They wrapped it in strips of cloth made from their priestly undergarments. And finally, to protect it from being stepped on by the other sheep, they would gently pick it up and lay it in a manger.

Are you making the connection? That is what was in the shepherds’ minds as they hurried to Bethlehem to see what the angel had told them. And when they saw the Lord Jesus lying in a manger, wrapped in priestly undergarments, they knew immediately knew who He was. They said to themselves, “This is the Lamb of God who takes away the sins of the world! You may wonder. Where did Mary get the priestly undergarments? My guess is that they were given to her by her cousin Elizabeth, who was married to a priest named Zacharias, who knew that Mary was about to give birth to the Messiah. What a sign both to them and to us!

You see, the truth is: God often seems to be silent. And yet, that’s when He does His greatest miracles, working quietly behind the scenes so every detail of our lives comes out just the way He wants. Of course, that means we need to pay careful attention. Because if we don’t, we could miss what He’s doing.

I don’t want to make that mistake today. I have been a pastor long enough to know that God may be working in the quietness of someone’s heart this very moment. You now realize what God was doing that first silent and holy night. He was sending us a Savior in the Person of His Son, who shared the Divine Essence with Him from eternity past. But then one day He stepped out of heaven, was born of a virgin, grew to be a man, lived a perfect life, died on a cross to pay for our sins, and then 3 days later came back to life with great power and majesty, proving His Lordship and that His work of salvation was successful. He was then exalted to the throne of heaven from which He is now about to return as the King of Kings and Lord of Lords over the entire earth.

Perhaps you believe this now, but no one has ever told you how to know Jesus Christ in a personal way. So let me invite you to do that right now. Because that’s how true peace on earth begins—not on a global scale, but on a personal level—by inviting Christ to come into your life, to forgive your sins, and to give you the power to live a new life of following Him. The Bible says, “For God so loved the world that He gave His only begotten Son that whoever believes in Him should not perish but have everlasting life.”

What do you need to do in order for that promise to come true in your life? All you need is simple childlike faith in Jesus, a sincere desire to know Him, and a willingness to let Him take control of your life from this moment on.

If that’s your desire, seal your decision with me in prayer right now. Say these words to Him: “Lord Jesus, I believe that you are the one and only Savior. You came to earth and died for my sins. But you didn’t stay dead. You came back to life and have the power to give me a new life too. Please forgive my many sins and come into my life today. With your help, I will follow you the rest of my life. Thank you for loving me. I pray in your name. Amen.” 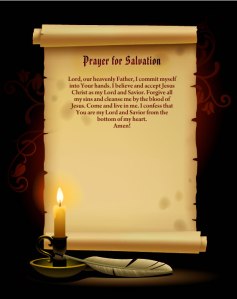 If you said that prayer and sincerely meant it, you are now a new person in Christ. (2 Corinthians. 5:17) Jesus Christ has forgiven your sins and promises to keep you and be with you forever. (Hebrews 13:5-6; Jude 1:24-25) What is your responsibility? He wants you to put yourself in a setting where you can grow.

This involves 3 important steps: First, if a friend has told about Jesus, phone that person right now and tell them about your decision. The Bible says that telling others about your faith makes it complete and real. (Romans 10:9-10) Second, spend a few minutes every day reading your Bible and talking to God in prayer. That is how we stay connected with Him. By the way, if you don’t have a Bible and would like help finding the right one for you, email us a note from our “Contact” page. We are glad to help you. Third, start attending a church where the Bible is taught and look for a small group where you can make friends with other Christian. Remember that just as the fire of a single log in the fireplace will soon die,  you need other Christians to keep your fire burning.

One response to “You’re Kidding! You Believe that God Became a Man?”