Mighty Mouse Is Here to Save the Day?

In my last post I made the point that God is eternal and we are not. I also took a stab at explaining what eternity means. But I ended on this note: “So what? So God is eternal! What difference should that make to me?” I believe it ought to make a huge difference, and in this post I’d like to describe the first way it should impact us. It should make us humble. In Psalm 90:3, Moses paints a picture of our lives compared to God’s. Referring to the Lord, he says:

God’s life is so much greater than ours that Moses says it’s like a thousand years compared to a “watch in the night.” How long was a night watchman required to stand guard? 3 hours! By that measurement it means no one has ever lived even one day in God’s sight, for how long have the oldest humans lived? Read the first chapters of Genesis and you’ll find the average age of those who lived before the Flood, like Adam and Seth, was 900 years. The reason they lived so long is a study in itself. Likely it was due to the idyllic environment and the short time sin had to do damage to their bodies. But regardless of the reasons, imagine what it would be like to live that long! Think of the events you’d have witnessed if you were born 900 years ago in the year 1112! You’d have seen the Crusades, the Protestant Reformation, the birth of America, and all the scientific inventions of the 19th and 20 centuries, not to mention our Civil War and two world wars. 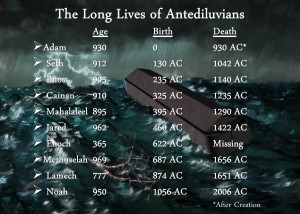 And yet, according to the standard set by Moses—a thousand years being equivalent to a watch in the night—this means that Methuselah, the oldest man who ever lived (969 years), lived only 2 hours and 54 minutes from God’s perspective. So what does that say about our meager 70 or 80 years? It means we should be humble, for as verse 10 goes on to say:

“The days of our lives are seventy years; and if by reason of strength they are eighty years, yet their boast is only labor and sorrow; for it is soon cut off and we fly away.”

James expands on this in his epistle. Speaking to some very self-assured and cocky business types, he warns: “Come now, you who say, ‘Today or tomorrow we will go to such and such a city, and spend a year there, and engage in business, and make a profit.’ Yet you do not know what your life will be like tomorrow. You are just a vapor that appears for a little while and then vanishes away. Instead you ought to say, ‘If the Lord wills, we shall live and also do this or that.’ But as it is, you boast in your arrogance; all such boasting is evil. Therefore, to one who knows the right thing to do, and does not do it, to him it is sin.”

When I read that passage, I think of a conversation I had with another minister several years ago when I was serving in my first pastorate. The other minister had just arrived in town and was in the process of planting a new church. So I asked him about his goals. Having come from a big church where his father was the pastor, he said, “I plan to have a thousand members by the end of two years!” I have to admit, I was a little intimidated and not a little irritated. After all, I’d been working tirelessly for two years in that town and had seen some significant growth. Our size had doubled from 75 to 150 in attendance on Sunday mornings. But we had no expectations of reaching a thousand members. But I didn’t say anything. I figured, “If God is in this, He will empower him to do just what he says.” So I decided to wait and watch. And at the end of two years, not only didn’t he have a thousand members, he had given up and left the area.

Why did he fail? Two reasons: 1) Presumption. He failed to realize that planting a church in the rocky soil of the Pacific Northwest is more difficult than starting a church in the Bible Belt, which is where he was from. 2) Pride. He forgot that “except the Lord build the house, they who build it labor in vain.” That isn’t to discourage us from setting big goals and striving to do big things for God. After all, if you aim at nothing, that’s what you’ll hit! The missionary William Carey advised, “Expect great things from God. Attempt great things for God.” But at the same time we need to remember our relative smallness in the process, making sure that we get our goals from God and we balance our faith with the fact that every good and perfect gift comes from Him, and that He ultimately decides where and how He’s going to bless. Or as James says in his epistle, “If the Lord wills, we shall live and also do this or that.”

That’s the first lesson we ought to learn, then, from God’s eternity. His life is to ours like a drop of water compared to the vastness of the ocean. Therefore, we ought to be humble and cultivate an attitude of reverence, surrender, and awe.

(Next time the second lesson from God’s eternity—Repentance!)

4 responses to “Mighty Mouse Is Here to Save the Day?”