Children often say amusing things about God. Here are a few statements made by grade school students asked to describe God. One said, “God is an old man who lives way up in the sky.” A second child said, “God is a very special person who lives in the clouds and all the dead people are his helpers.” Another piped up, “God is an old man with a white beard who is tall and nice.” The fourth one explained, “God is the only one without a birthday because he was the first one.”

Interesting answers, for sure! But do they square with what the Bible says about God? In some ways, yes! In some ways, no! The Bible does say that God has lived a long time—forever, in fact! Daniel 7:9 calls Him “the Ancient of Days,” Moses echoing this thought in Deuteronomy 33:27 where he comforts us, “The eternal God is your refuge and underneath are the everlasting arms.” But no, God is not old, for He doesn’t age like we mortals. The best way to explain it is to say that God is eternally young, as full of life and joy and power today as He was when He spoke the universe into existence. Hebrews 1:10-12 affirms this: “You, Lord, in the beginning laid the foundations of the earth, and the heavens are the works of Your hands; they will perish, but You remain; and they all will become like a garment, and like a mantle you will roll them up; like a garment they will also be changed. But You are the same, and Your years will not come to an end.”

So far in our study of God, we’ve meditated on His holiness, His goodness, His faithfulness, His knowledge, His justice, and His patience. But in this and the next two posts, I want to glory the Lord by talking about His eternity. This is one of the divine mysteries that ought to humble us and fill us with awe because of its depth and the impossibility of fully grasping it with our minds. For how can the finite hope to comprehend the infinite! And yet, it is imperative to believe what the Bible says about this topic because of its impact on our faith and worship.

When I was a boy, my dad tried to help me understand God’s eternity by likening it to a giant boulder that lies at the end of the world in the land of Svithjog. This boulder stands 1,000 feet high, 1,000 feet wide, and 1,000 feet long. Once every 1,000 years, a little bird comes along and pecks at it to sharpen its beak. When that rock is finally worn away, the first day of eternity will have passed. I like his analogy but it falls short in this sense. As long-lasting as that rock may be, even it has the possibility of being worn away. Whereas God had no beginning, nor does He age or will His life ever expire. As Revelation 4:8 explains, God is a timeless Being who has always been, ever is, and always shall be. This is a concept that is beyond our ability to comprehend. Nevertheless the Bible says it is true.

Consider Moses’ words in Psalm 90: “Lord, You have been our dwelling place in all generations. Before the mountains were brought forth, or ever You had formed the earth and the world, even from everlasting to everlasting, You are God.” To appreciate what he’s saying, it’s important to remember the context. This was written during the wilderness wanderings before God’s people entered the Promised Land, while they were still homeless, living in tents, and without a place to call their own. And yet, Moses reminds them that they do have a place of refuge and comfort, and that’s the Lord Himself. For no matter where we go or what life brings our way, the one thing we can count on is God. For He has been “our dwelling place in all generations.” Or said another way, God’s goodness is not limited to one age or people. The Lord “is rich to all who call upon Him, for whosoever calls upon the name of the Lord shall be saved.” (Rom. 10:13)

Before I met Christ, I used to think, “O, if only I lived in the time of Moses or the apostles, it would be so much easier to believe—seeing God do all those fabulous works among His people!” Then I realized, if God is God, His goodness never ends. It continues forever. Why? Because from everlasting to everlasting He is God! In fact, the Hebrew word is interesting here. It literally means, “From vanishing point to vanishing point, You are God!” The human mind can look backward in time until time itself begins to fade, and it can look forward into the future until it collapses from exhaustion, and God is still there, beyond what our minds are able to conceive, because from everlasting to everlasting He is God!

You see, the life of God is fundamentally different from the life of man. The Bible says we are immortal beings, for when God breathed into Adam the breath of life, man became a living soul. This means that even though our bodies wither and die, our souls continue forever—either with God or apart from Him. So to a certain extent, we can imagine what it’s like to live forever. But to conceive of Someone who has always been without ever having had a beginning, that’s a thought which is beyond our understanding, for God alone is eternal.

C.S. Lewis likened it to a sheet of paper extending forever in two directions. He said to draw on that paper a short line representing time, for just as that line begins and ends on that infinite piece of paper, so time finds its beginning and end in God. He’s already lived all of our tomorrows, just as He’s lived all of our yesterdays, for He has no past or future. Instead, He lives in an everlasting now. What that means, I have no idea, but I believe it—that God exists outside of our space-time continuum. As Genesis 1:1 proclaims, “In the beginning God created the heavens and the earth,” indicating that when time began, God already was, seeing the end from the beginning in one great eternal view. “For I am God, and there is none like Me, declaring the end from the beginning.” (Isaiah 46:9)

You say, “All of this is very heady stuff, but what good is it? And how is knowing this going to help me?” I believe it’s extremely practical and important. And in my next post I’ll explain why. I hope you’ll return to read more and that you’ll share it with someone who may not yet know Christ in a personal way. 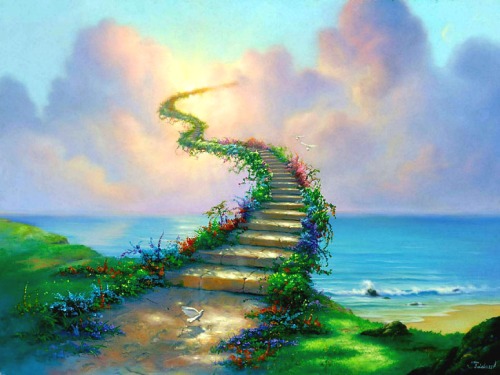 One response to “God Is Like a Massive Make-Believe Boulder?”