The Portrait of John’s Gospel: Jesus Is Lord!

Children write letters to Santa Claus at Christmastime. But one little girl knew that wasn’t right. “After all, Christmas is about Jesus, not Santa Claus!” So she wrote a letter to Baby Jesus and dropped it in the mailbox. Two weeks later, it came back stamped, “Return to Sender. Address Unknown.” I hope someone explained to her that though the USPS was unable to deliver her letter, we know right where Jesus is and have no need of the post office, email, or text messaging to reach Him. We can talk to Him at the speed of thought through prayer.

Of the four gospel writers, John is the most helpful in answering these questions. Several weeks ago, prior to my wife’s cancer surgery and initial recovery, I took us through an overview of the first three gospels – Matthew, Mark, and Luke. In this study, I focus on 3 critical questions answered by the gospel of John.

1) Where Did Jesus Come From? Jesus answers this question Himself in John chapter 6. After feeding 20,000 men, women, and children with two fish and five biscuits (Luke 9:14 says they only counted the men when numbering the crowd at 5,000, which means He fed to 4 to 5 times that many), He uses this great miracle to teach us a vital truth about Himself. Verse 41: “I am the bread that came down from heaven.” In fact, this truth is so vital He repeats it 7 times in this chapter – “For the bread of God is He who comes down from heaven…I am the bread of life…I have come down from heaven not to do My will but to do the will of Him who sent me…I am the living bread that came down from heaven. If anyone eats of this bread, he will live forever.” (John 6:33, 35, 38, 51)

Why is this truth so vital? First, it clarifies His identity. Jesus is no mere man for unlike the rest of us, His life didn’t begin at conception and birth. That’s why there’s no genealogy in this gospel as there is in Luke and Matthew. Luke traces His ancestry back to Adam picturing Jesus as the perfect man whereas Matthew traces his lineage back to Abraham and David proving that Jesus is King of the Jews. But there is no genealogy in John because John wants us to understand that He had no beginning. Jesus was one with the Father from eternity past. John 1:1, “In the beginning was the Word, and the Word was with God, and the Word was God…All things were made by Him and without Him was not anything made that was made.” Then, to make sure we understand who the Word is, He adds in verse 14: “The Word became flesh and dwelt among us, and we beheld His glory, the glory as of the only begotten of the Father, full of grace and truth.” 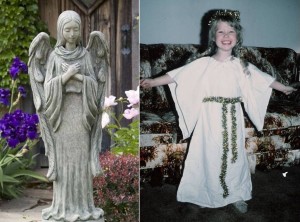 I remind you at this point that there is a vast difference between being created and being begotten. When I create something, I make it out of a substance that is different from my own. I take a picture using my digital camera. I sculpt a statue out of clay. But when my wife and I begot our two daughters, we produced them and gave them life out of our own flesh and blood. That’s why it doesn’t work to explain Jesus’ pre-existence by claiming that He was the first angel or a demi-god created by God for the Bible is clear: Jesus is the only begotten Son of the Father who shares His eternal essence, not only making Him one with and equal to the Father, but also making it right and necessary for us to worship Him as we do the Father. This is why Jesus answered Philip’s request the way He did in John 14:9, “Don’t you know me, Philip, even after I have been among you such a long time? Anyone who has seen me has seen the Father. How can you say, ‘Show us the Father’?” It’s also the reason why Peter, James, John, Thomas, and the rest of the disciples fell down at His feet in worship when they saw Him in His glory. They were recognizing that this is “My Lord and My God!” (John 20:28)

The second reason this truth is vital is because of what it reveals about His priority. Jesus likens Himself to the manna in the wilderness to emphasize our need of Him. Just as the nation of Israel relied upon bread from heaven for their daily lives, we need Jesus for the eternal life He offers us. Following the feeding of the 20,000, John 6:15 says the crowd wanted to make Jesus king by force. But He wouldn’t have it, for He knew there was a greater need than filling their bellies. There is a God-shaped vacuum in our hearts that only He can fill. “I tell you the truth, it is not Moses who has given you the bread from heaven, but it is My Father who gives you the true bread from heaven. For the bread of God is He who comes down from heaven and gives life to the world.” (John 6:32-33)

Let me insert a comma at this point and ask you a vital question before I go on: Have you recognized who Jesus is and how badly you need Him? If you’ve lost the joy of living or you feel anxious about the future, chances are you’ve been trying to life life without fully depending on Him or surrendering to His will for you. In my next post, I’ll finish this study with two more questions answered by John’s gospel: Why did Jesus come and where did Jesus go? But do not let this day end without telling Him how much you need Him. You need Him more than you need bread for your belly, for He said, “I am the bread of life. He who comes to Me will never go hungry, and he who believes in Me will never be thirsty…For my Father’s will is that everyone who looks to the Son and believes in Him shall have eternal life, and I will raise him up at the last day.” (John 6:35-40) Look to the Son this very moment, then, for fullness of life today and joy forever!

4 responses to “The Portrait of John’s Gospel: Jesus Is Lord!”